The MetrySense-4000 (MS4000) Flashover Prediction system is a unique patent-pending solution designed for High Voltage T&D power lines. As of today, this disruptive flashover prediction technology is the only proven and operational solution of its type deployed in live environments. MS4000 reliably and efficiently provides real-time analysis of contaminated insulators and predicts likely flashover-prone insulator strings. Each MS4000 sensor covers a two-kilometer power line segment, which includes all the insulators situated in its range, as opposed to  leakage current detection systems , whereby one sensor can only monitor a single insulator. This is the only available monitoring system featuring a rapid ROI of approximately one and a half years.

Existing solutions are not efficient

The issues relative to the determination of contamination levels of power transmission lines have been studied in numerous research centers and energy systems for over 50 years.

Due to concerns regarding environmental pollution, this issue benefits from increased attention today. Yet, existing solutions are not efficient.

There are three main methods used today for determining where and when to perform line washing operations:

The physical process of contamination, dry-band-arcing and flashovers

Since the insulator’s surface area is not even, neither is the current density along the string uniform. As a result, different areas of the insulator heat up unevenly. At locations where the current density is maximal, distinct patches around the circumference of the insulator dry up, and therefore the resistance of these patches increases considerably. The voltage drop on such a patch increases, up to the value at which a breakdown of the air gap occurs. Thus, an electrical arc (dry-band-arcing or discharge) is formed, shunting the dried insulator patch. Then the current passes along the surface of the insulators, drying the water drops, and the arc is extinguished. The dried surface becomes humid again and the process repeats itself. The resulting arc may develop on any area in the string, and it may cover one or several insulators, depending on the contamination level, the structure of the insulator string, and the amount of wetting (moisture/humidity).

The following videos were taken in IEC’s lab as a part of the MerySense-4000 R&D process, which included extensive tests on many types of insulators. In the following videos, high voltage was applied on contaminated insulators, and the voltage was gradually increased. First, dry-band-arcing appears on the surface of the contaminated insulator. Then, when the voltage reaches a critical level, a flashover occurs followed by a trip of the protection system, which in turn causes a power interruption.

Dry-band-arcing on a contaminated porcelain

Principle of operation of MetrySense-4000

A MetrySense-4000 sensor is mounted on the shield wire (ground wire) near the top of the tower, and is connected to a MetrySense-4000 data acquisition unit which is mounted on the tower. The signal received by the sensor is processed by the DAQ in frequency domain and in time domain, and the processed information  is kept in a local data base in the DAQ. This information is then sent via the IPv6 radio network that is automatically created by the DAQs and reaches the MetryView server for final analysis and presentation.

The following example illustrates the operation of the MetrySense-4000 system before and after a washing operation. The system was installed on a 400kV line in Israel on 30.8.2012. 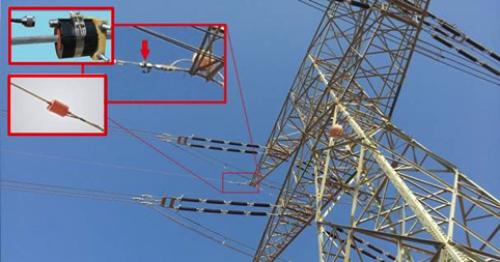 (a) The sensor which is installed on the shield wire 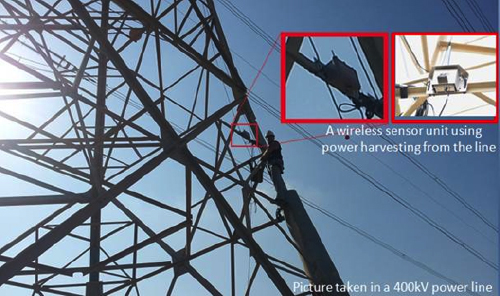 On 19.9.2012, about three weeks after the installation of the system, the transmission line was washed by a helicopter, and the washing operation was captured by the following video:

The following graph shows a MetryView graph of dry-band-arcing which existed before and after the washing operation. This graph is a result of processing of hundreds of sensor samples.

This is the presentation of the sensor of our example before and after the washing operation:

In this example, the status was “yellow”, and there was no urgency to wash the line. In fact, rains in this region of Israel starts at November, and this washing operation could have been saved in this case.